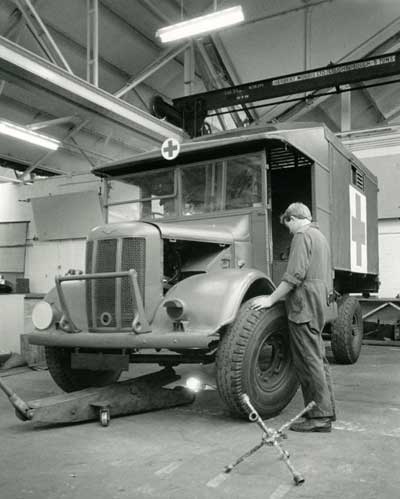 The Army Camp at Ashchurch is situated in the outskirts of Tewkesbury and is considered to be extremely important and invaluable to local history and heritage. The camp was created in 1938, and continued to function well into the 20th Century. This became the MODs primary vehicle storage and distribution site and one of the biggest employers in Tewkesbury up until the end of the twentieth century.

The first Americans arrived at Ashchurch in June 1942 taking it over from the RASC, with more Americans arriving in December of that year to set up an Ordnance supply depot (called G25) from scratch. This became the largest depot in the British Isles. There are many stories about the Americans in Tewkesbury.

After the Second World War ended, the RAOC took over the depot which continued to be used as a vehicle storage and distribution site serving the British Army, Navy and Air force worldwide. By 1971 there were 170 soldiers and 750 civilians employed within the camp but sadly this was reduced by 50% in 1995.

Currently, Ashchurch Camp is the UK MOD’s primary vehicle storage and distribution site for all types of armoured and soft skinned vehicles.

Ashchurch Camp was built with the old Midland Railway line from Malvern to Evesham to the north. On the west the western main railway line from Bristol to Birmingham and on the south runs the A46 which, before the motorway, was part of an important east-west cross-country route.

Siting Ashchurch Army Camp at the junction of two railway lines would have been an important decision when selecting a site.

There were also a number of other considerations when choosing the site: