The Roof and Rainwater Drainage

The roof probably dates from the eighteenth century, with some reconstruction in the nineteenth century and structural supports being inserted through the years since. It possibly follows its original form, but there’s no certainty.

The roof is covered in plain clay tiles, which is typical of Tewkesbury buildings.

The roof form is unusual, and might have started, on the front part of the building, as three simple ridges with gables. Long ago, though, this was changed to a very unusual, and inconvenient, form with the gables cut back, giving a ‘clean’ view from the street, but at the same time making two inaccessible internal wells, which funnel rainwater into the centre of the building, from where it has to be channelled to the outside,

This has made for very unreliable water drainage arrangements, Gutters are formed from lead-lined timber channels which send all the water to downpipes at the rear. To do this, the gutters run through the roof space. The rainwater from the front of the building flows to the back along these channels, collecting water from the two ‘wells’ along the way. This arrangement has two drawbacks; blockages can flood the building, and have done; sealing the roofspace against draughts and wildlife is impossible, because the gutters have to pass through.

Evidence of past problems can be seen in the second floor ceiling, where leaks over the years have caused the ceiling to sag badly. Downpours which exceed the capacity of the drains have caused this damage. 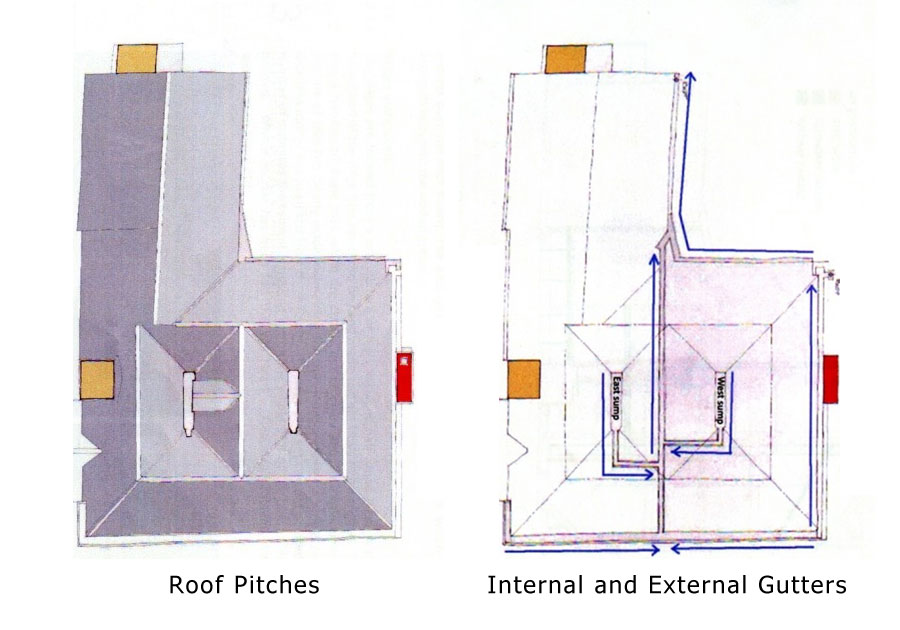