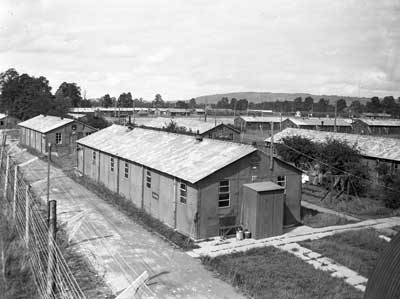 Camp 1009, Northway was a Second World War prisoner of war (POW) camp for Germans. It was known as a German Working Camp.

The site flanked the southern side of the A46 Road, and measured 300m long by 185m wide, with the camp’s sewage works on to the east of the site. It was situated on the grounds of what was once part of the Northway House Estate, in Ashchurch , Tewkesbury. This site was originally given to the Americans in 1942 and a section of this American camp was used as a prisoner of War camp, later handed to the British in 1946.

The POW camp had a wire fence surrounding it and guard towers, which are thought to have been erected in 1945. It was thought to be a collection of nineteen huts, in dormitory style each had electricity and stove heating with a capacity of 800 men. Most of the prisoners were German captured in France and Germany after D-Day. The prisoners included One SS and 420 Wehrmacht Heer. The majority of the prisoners worked at the RAOC Depot (Ashchurch Army Camp G25), reached by the metal foot bridge which the prisoners built over the railway line. This camp closed in 1947 and remained largely empty until it was developed into a housing estate.