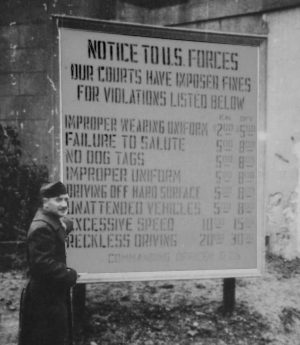 American forces first arrived in Tewkesbury in August 1942, after they were given the site of the Northway House. There a large army camp was built for the Americans. Officers were billeted into Northway House, with other ranks staying in huts and black Americans segregated to the far south of the site.

On the 1st August 1942 the Tewkesbury Register and Gazette prepared readers for their first meetings with US soldiers by publishing an article about American Army badges, explaining how to recognise the different ranks. Although the insignia of non-commissioned ranks in the US Army were very similar to that in the British Army, it was very different in the higher ranks. The aim of the article was therefore to avoid offending or causing embarrassment to anyone. As well as giving information concerning the number and colour of stars that the various officers wore, the paper was careful to point out that, to a British person, it might seem that the Americans wore their stripes upside down, but in fact that was the right way up for them. 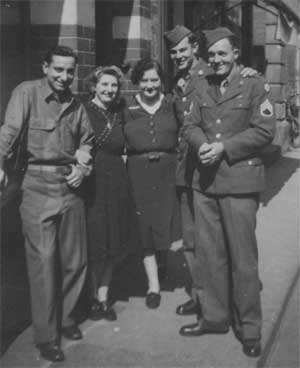 Within months the local paper became concerned less with the need to be sufficiently welcoming to the Americans and more preoccupied with concerns that some of the locals were actually being too friendly! On October 24th 1942 the Tewkesbury Register and Gazette contained an article entitled ‘Girls who “hang round camps”’. It revealed that the Gloucestershire Federation of Women’s Institutes had passed a resolution that the time had come to increase the number of women police in the county in response to the increasing number of young girls who had begun to hang around the camps at night. The proposer, a Mrs Vernon, believed that increased supervision would deter them, blaming the girls and their parents for this situation, but not the soldiers themselves. The applause given in response to this suggests that there was considerable goodwill towards the American soldiers.

American soldiers were cautioned by their officers not to spend their money too freely in Britain, partly for fear of destabilising the value of pounds sterling and also to avoid fuelling the widespread grumble in 2nd World War Britain that the American Troops were ‘ over sexed, over paid and over here’. However, they found other ways to be generous to their hosts, providing gifts and parties for children as far away as Stratford-upon-Avon. They even staged shows at the Sabrina Cinema in Tewkesbury to raise money in aid of British prisoners of war.

In December 1944 the Tewkesbury Register and Gazette described an enormous party for 750 children at the Ashchurch Depot with music, cartoon films, Santa Claus, ice cream, huge amounts of chocolate and can-dies; and wooden toy gifts fashioned by the soldiers from scrap timber. One little girl said that the package of sweets she was given was too heavy for her to carry home. 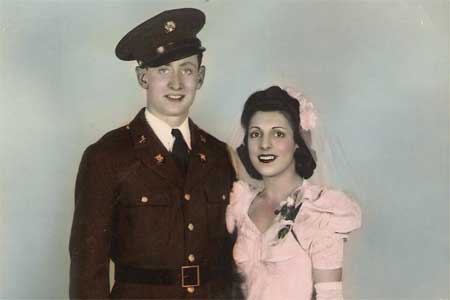 There were romantic liaisons between US soldiers and British girls, some of which led to marriage. For example, in March 1944 the Tewkesbury Register and Gazette reported that Miss Muriel Mary Hudman of Priors Park had married GI John Arnold of New Jersey. Some American girls met the men of their dreams in Ashchurch too and US officer Lieutenant Herbert Walker of New York married US Army nurse Lieutenant Mildred Plesh of Pennsylvania.

The local newspaper Tewkesbury Register and Gazette of the 14th November described ‘an impressive celebration’ that was held on Armistice Sunday. The article was headed by a photograph of a United States Army officer placing a wreath on the war memorial. On this occasion the American soldiers at Ashchurch Camp marched in procession with Tewkesbury’s Civic representatives to the war memorial. In addition, American Army chaplain Rev. G W Baker preached during the service at Holy Trinity Church.

One occasion of great significance to Americans which received local support in Tewkesbury was the observance of Thanksgiving Day. On the 14th November readers were informed that, on the 26th, all Americans, wherever they were, would be celebrating the first harvest gathered by the Pilgrim Fathers. After a brief history of that event the article went on to say that, as an expression of friendship and understanding, Tewkesbury Abbey would be made available to the American troops on that day, so that their own chaplains could conduct a service in it. The civilian population of Tewkesbury was encouraged to attend the service also, as a ‘gesture of regard for our American allies’.

A week later, the paper contained the arrangements for the non-sectarian service, which was to start with ‘God save the King’, end with ‘The Star Spangled banner’ and also include a selection of hymns well known on both sides of the Atlantic. A Roman Catholic service was also planned, to take place at St Joseph’s Church on The Mythe. 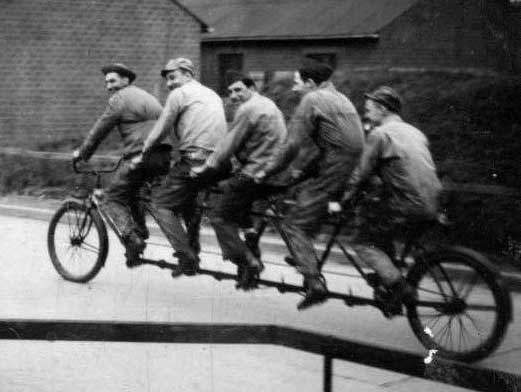 A further step to ensure the welfare of the American troops was mentioned at the end of the article, as it was reported that a Hospitality Committee was set up to provide hospitality and welfare amenities for American troops. The article ended by expressing the sincere hope that the public would generously support this work.

The Thanksgiving Service in the Abbey was described in detail in the paper on the 28th November. 250 American soldiers attended, led by Adjt. Lieut. L W Matten. A further 200 American soldiers under Col. J W Dehmann attended the service at St Joseph’s. The Abbey and St Joseph’s were also used for similar services in November 1943. Following the services, a letter of appreciation was received from Chaplain G W Baker, expressing warm thanks for the use of the Abbey and the cooperation of all concerned.

During May 1944 a special week was held –‘ Salute the Soldier Week’, with the aim of boosting fund raising for the armed forces personnel. The week started with a well-attended parade of military units, which included US Army soldiers from Ashchurch Camp, together with the Gloucestershire Regimental Band, the RAF, the Home Guard, the ATC and the Sea Cadets. The salute was taken by Colonel C W Richmond from the USA and the mayor. By this time the American troops were very much a part of the Tewkesbury Community, but soon, although they didn’t know it, many of them would be leaving soon to take part in the D Day landings, never to return.

Suddenly, very quietly and without any mention of it in the local press, the American forces moved south, ready for D Day. Very few personnel were left at Ashchurch camp and, to some local people, it must have seemed that the camp had been abandoned. 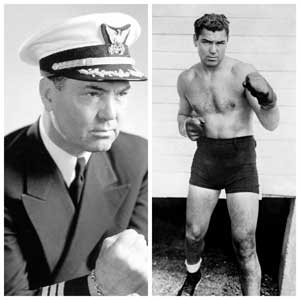 There were, however, enough American soldiers still left in Tewkesbury in the autumn of 1944 to host an exciting series of American football matches on Breaking Stone Meadow. One match, between the US Army and the US Navy, made the front page of the Tewkesbury Register and Gazette, particularly because it was attended by Commander Jack Dempsey, the famous American heavyweight boxing champion. Local people were curious to see how American football differed from soccer, but found the game easy enough to follow and enjoyed seeing the US Navy win the match, 12 – 0.

During the spring of 1945 the American population of Ashchurch dwindled further and, as the war drew to a close, high-ranking officers turned their attention to showing their appreciation for the hospitality they had received. Lieutenant General C H Lee wrote to the Mayor of Tewkesbury to express his thanks, on behalf of General Eisenhower and, opening a garden party in the grounds of Ashchurch House, Colonel H C Horne, then Commander of the Ash-church Depot expressed his thanks and spoke of treasured memories of happy times in England. Entertainment was provided by the Barons US band and the Americans entered teams in the popular tug-of-war competition. Finally, in July 1945 Tewkesbury Hospital was very pleased to receive from their American guests the very latest anaesthetic equipment, for use their operating theatre. By the autumn of 1945 the US Army had returned home.